How to Play Amazon Music on Kodi

Kodi comes up to our mind when we are about for searching a free and open-source media player. Despite being developed by the non-profit tech consortium, Kodi isn't inferior to some pricey media players. Kodi is a great place where you can play video, music, podcasts, and other media files sourced from streaming services or local folders. Kodi extends support for multiple operating systems and hardware platforms. With a 10-foot user interface, Kodi can even smoothly run on televisions by remote control. 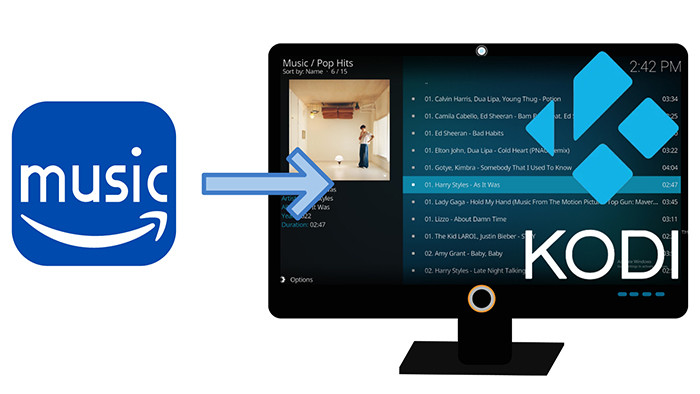 🔷 Steps to Stream Music on Kodi

Step 1: Start the Kodi app on your computer or other devices. Navigate to the left panel, click on the settings icon then choose Add-ons. Or scroll down on the left side menu and move the pointer cursor to the Add-ons column. 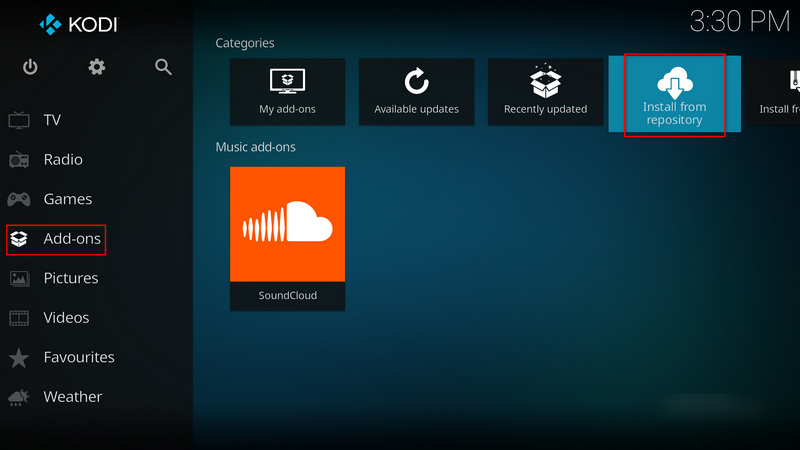 Step 2: Then more options will be displayed on the right panel. Click on Install from the repository. On the listed options, choose Music add-ons. 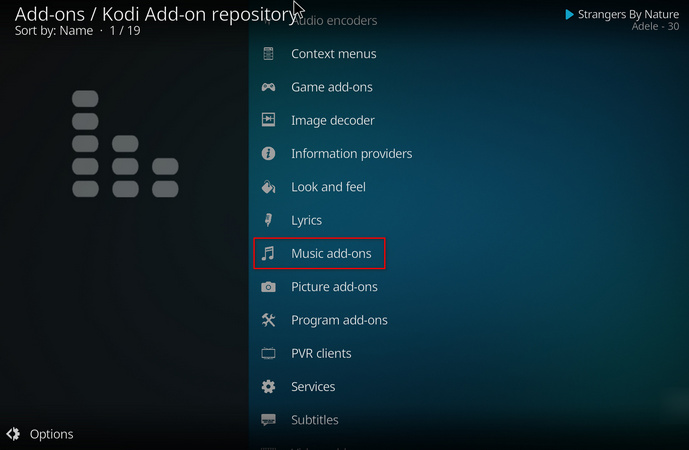 Step 3: Then you will see a bunch of selections of add-on programs available to install, including Amazon Prime Music, SoundCloud, Bandcamp, Google Drive, etc. 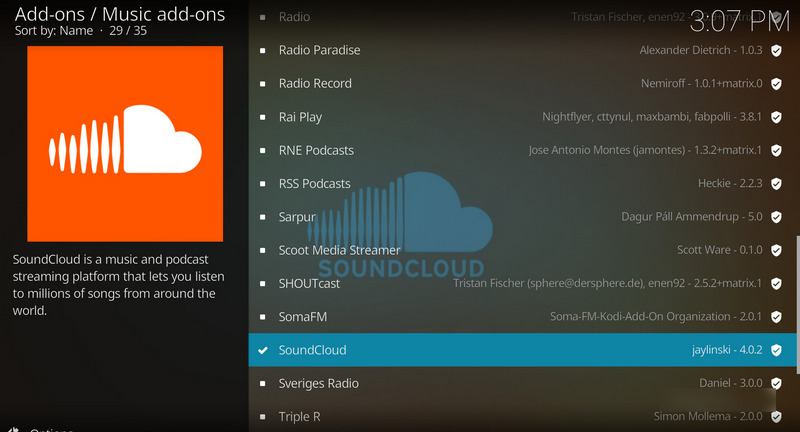 Step 4: Click on the Prime Music installer and wait for downloading.

Step 5: Once it's downloaded successfully, a pop-up prompt will appear on the top right. Click the pop-up message to log in to Amazon Music. Then you can play Amazon music you like on Kodi.

🔶 Other Things You Should Know:

You may notice that not all users can find the Amazon Prime Music installer on the Music add-ons list. Because Kodi has attracted negative attention due to the availability of USB plug-ins for the software that facilitate unauthorized access to copyrighted media content thereby it's forced to remove some add-on programs.

There is an impediment to your process, but we have an ace up my sleeve. If you are still up for playing Amazon Music on Kodi without restrictions, we will not hide the best solution from you anymore. Next, follow the next part to check how it works.

We are certain that this solution is gonna work since we tried it recently many times. Once Kodi has banned access to the add-on Amazon Music, you can only approach Amazon Music by importing the Amazon songs locally existed. However, you are overtly familiar with how streaming services operate. They allow for online streaming and limited offline downloading of music based on an activated subscription.

If you stepped into this topic and are willing to give it a shot, you've most probably registered for a paid Amazon Prime or Unlimited Music tier. Notwithstanding, you are still suffering from failure to connect Amazon Music with Kodi. Why? Because the downloaded Amazon Music tracks are only cached as encoded files on your local PC instead of unconstrained local songs available for liberated use. consequently, a followed-by question is brought up, how? How can I get rid of the restrictions and download songs from Amazon Music genuinely then add them to my Kodi?

We throw a positive answer first to comfort you. Here we adopt a particular tool, TuneCable Amazon Music Downloader to realize what you are opting for. This magical converter decrypts Amazon Music tracks and perfectly downloads them to a Windows PC or Mac in common MP3, AAC, FLAC, WAV, AIFF, or ALAC format. You may be most concerned about the sound quality. This program qualified job for the super ability to extract Amazon music with the original quality preserved. Furthermore, the ID3 tags will be completely retained, including cover art, title, artist, album, artist, year, track number, and so on. As a result, you are capable of adding any Amazon Music track, album, playlist, and podcast to Kodi for unlimited playback. Here follow our detailed steps to conduct the conversion and then add Amazon songs to Kodi to listen to. 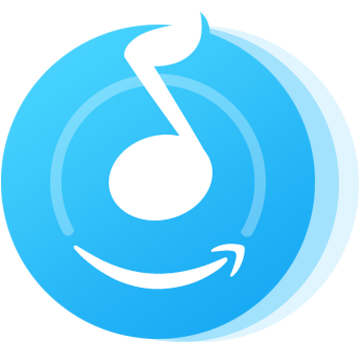 In this section there are two subsections: 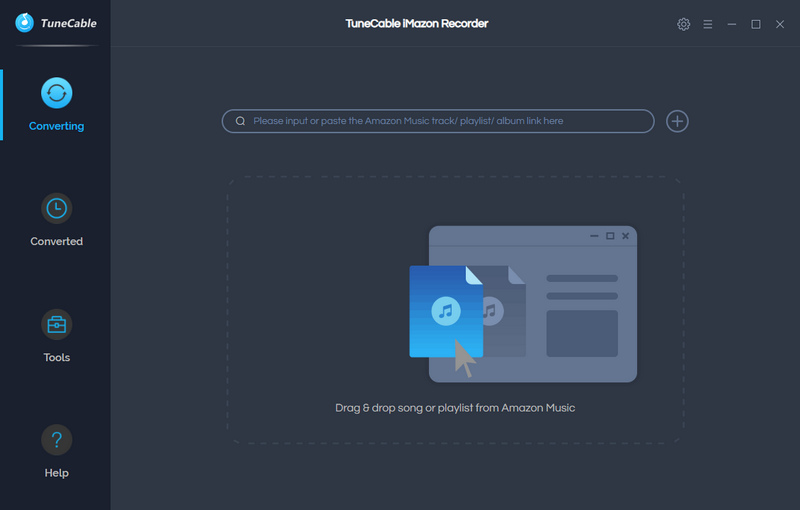 Step 2 Change the Out Parameters Accordingly

The "Settings" icon is situated at the top right of the main interface of TuneCable. Click it to check what options are open to change. When selecting the conversion mode, try "Amazon Record" to get the songs downloaded from the Amazon Music app thereby the best sound quality can be saved.

The options of sample rate and bit rate will vary accordingly after selecting the desired output format. As listed in the first part of this article, MP3, AAC, FLAC, WAV, AIFF, or ALAC formats that TuneCable provides are compatible with Kodi. But to keep the best quality, the FLAC format always stands out as it's considered the original format of Amazon music.

If you require to add more than one tags, such as {Track Number}, {Title}, {Artist}, {Album}, {Year}, {Playlist Index}, then you can go to the "Output File Name" setting. The selected tags will be exported with the Amazon Music tracks, which helps you easily locate the desired songs by different classifications, like by albums, artists, playlists, etc. after adding the downloaded Amazon songs to Kodi,

To be more user-friendly, TuneCable will download every Amazon Music track with its cover images kept by default. 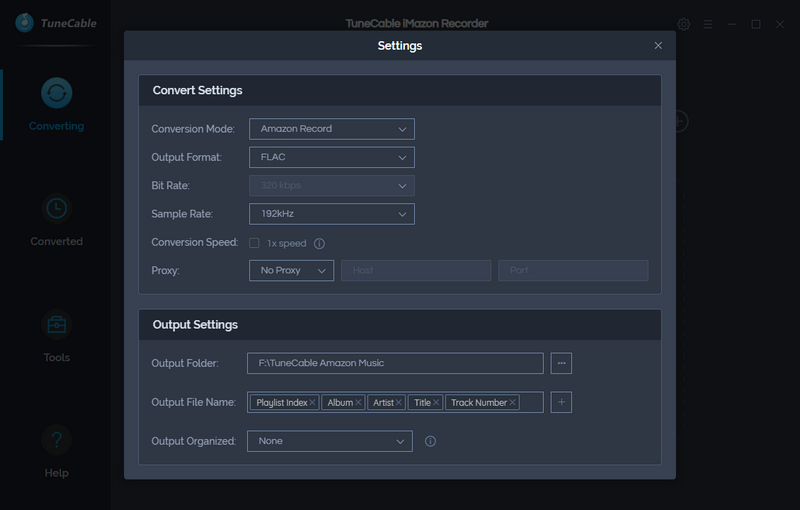 TuneCable can add songs from Amazon Music in two ways, drag and drop the song or copy and paste the link to download. In most cases, we favor the first choice over the second due to it being more convenient and simple.

Simply find the song, album, or playlist you want on the Amazon Music app, then move to its title to drag and drop it to the primary interface of TuneCable. TuneCable will perform an immediate parsing and display the songs you've added.

If you prefer several tracks in this playlist or album, you can deselect the others and then tap on the "OK" button. After that, if you expect to download more songs from other playlists or albums at once, click the "Add" button in the upper-left corner or delete some useless tracks by clicking the "delete" icon. 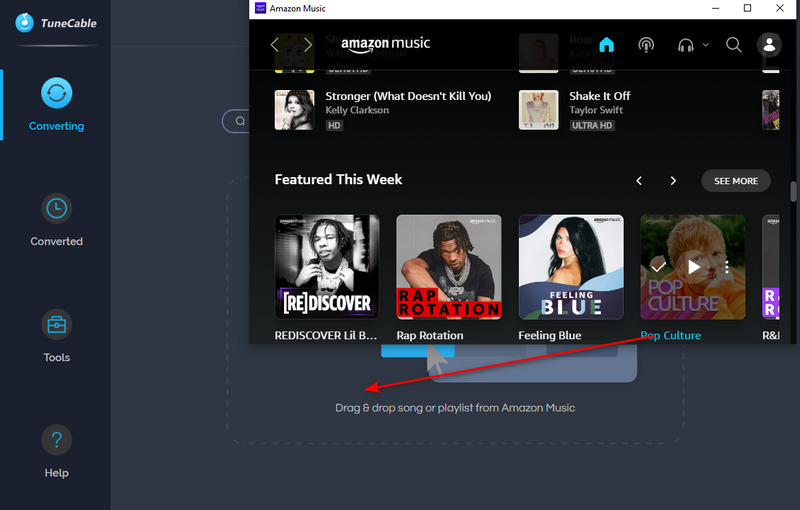 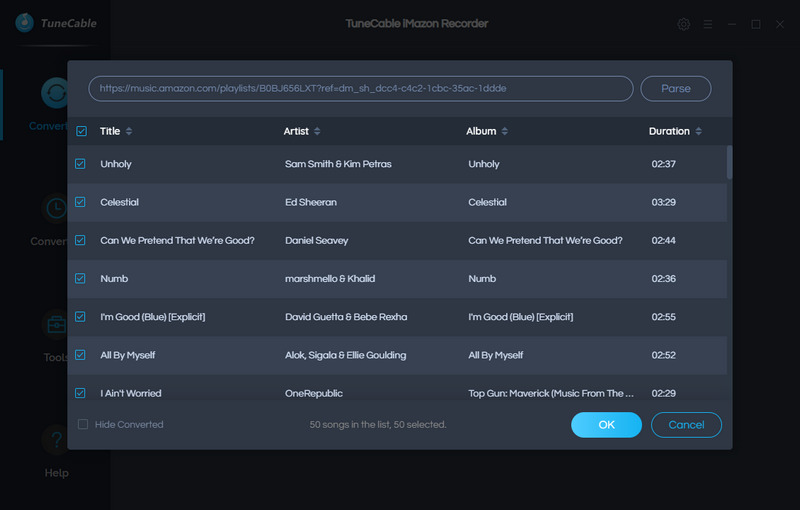 Lastly, we come to the conversion part. Once you make the decision, After all of this, tap on the "Convert" button to conduct the conversion mandate.

As you've set the output formats, your added Amazon songs will be converted to your desired formats. Then converted Amazon Music tracks will be well-organized on your computer, you can treat them as normal local music files. Now, let's check the easy part - how to play Amazon music on Kodi. 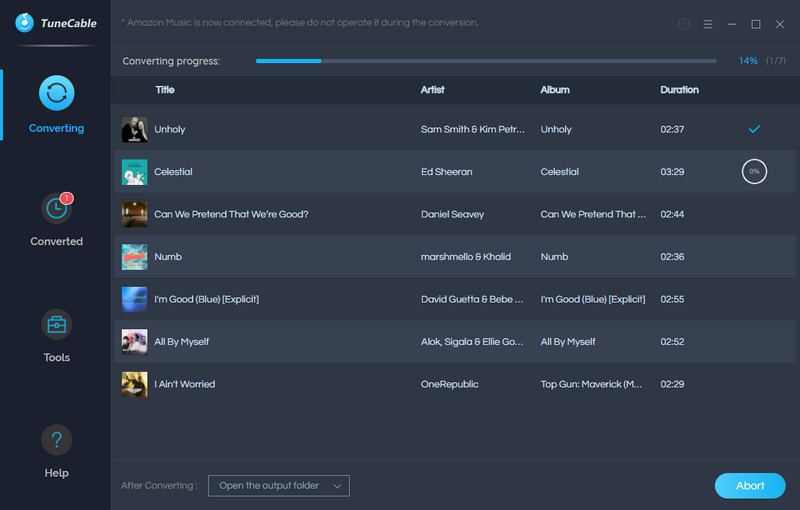 next, we are going to introduce the involved steps to play Amazon music on Kodi.

Step 1: Get the Kodi app installed on your computer from its official homepage. 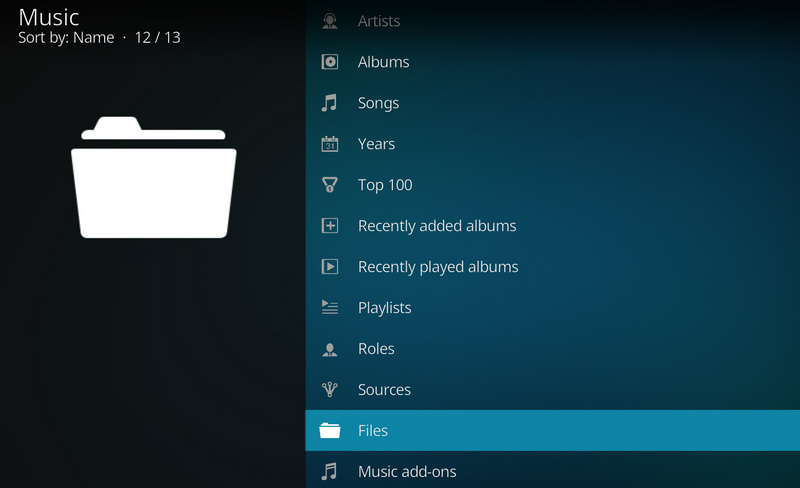 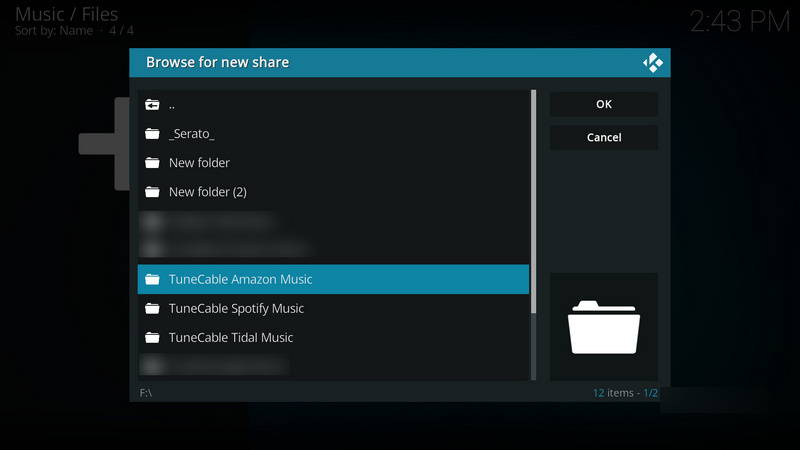 Step 4: Then the songs from the local PC will be added to the Kodi music library. You can freely pay the imported Amazon music on Kodi. And the songs will be automatically classified by albums, playlists, artists, etc. 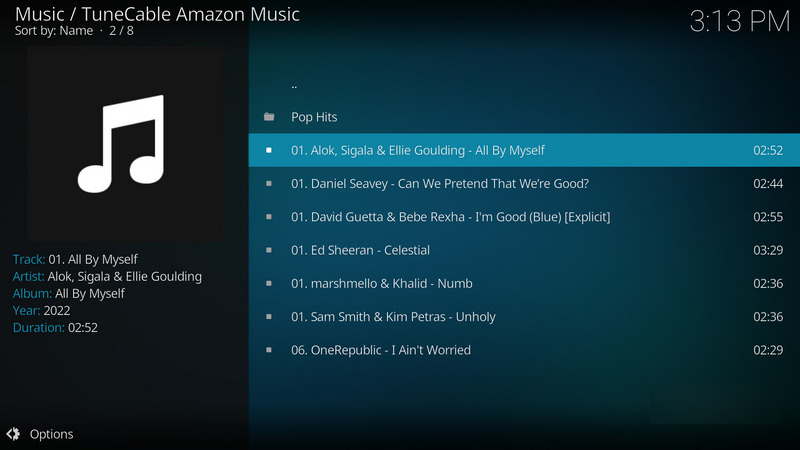 Bonus>> Other usages of the converted Amazon Music files:

If you came to TuneCable Amazon Music Downloader at first, you may not waste much time struggling with how to use Amazon Music with kinds of programs, or how to transfer Amazon Music playlists to your mobile phone or MP3 player. It's really helpful whenever you are pondering more control of Amazon Music downloads. Get the best assistant downloaded and installed to perform the conversion of Amazon music then unlock the unlimited enjoyment of Amazon Music playback on Kodi or other programs right away.